This year I started using Twitter for the first time, so I was super excited to get to this lesson!  I have really been enjoying learning about Twitter, and I appreciated how this lesson helped me practice some of the tips and tricks to become a successful Twitter user.  BTW....is there a word people use to refer to "Twitter users?"  Personally I like the idea of being birds...in a flock?...maybe not. 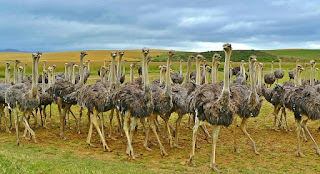 The coolest thing I learned during the lesson was how to embed my Twitter feed into my blog.  I asked Google how to do it and with a little trial and error was successful!  I like how the Twitter feed adds a little more personality to my blog and makes it feel more personal.  I also added the Twitter icon that lets people follow me from my blog page.  I was wondering if it's good Twitter etiquette to put both the feed AND the follow button together on the same page?  Is there a Twitter etiquette page that anyone recommends? 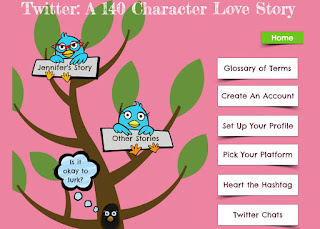 Out of all of the articles that I read in the course of this "Thing," my favorite was Twitter: A 140 Character Love Story.  I am so impressed with how Jennifer LaGarde set up this resource, and I love the idea of planning some PD around this website.  It would be a very straightforward way for teachers to jump in to Twitter, and if I had been introduced to Twitter by this website I think most of my uncertainty and anxiety would have been eased!  I would love to try one of the Twitter challenges...does anyone know of a place that lists upcoming challenges?  I wasn't quite ready to start the #12daystwitter challenge when Polly posted it.

Another article I found extremely useful was 10 Golden Rules to take your Library Twitter Account to the Next Level by Ned Potter.  I have been trying to follow some of the advice in this article; mainly, that I need to tweet more multimedia.  I am also trying to follow the 1st rule about only tweeting 1 time in 4 about your own library.  It is tricky!  The 1 time in 4 rule means that you have to make a commitment to actively read other's tweets and explore their resources.  It definitely forces you to become more engaged.  I have slowly been growing and becoming more connected with other teachers in my district, so I am using that rule as an opportunity to try to retweet what they are doing in their classrooms.  I am seeing some amazing things happening around our district this way, which makes me feel more motivated!

I was a little overwhelmed with all of the Twitter tools out there...I will be checking the discussion board for ones that people like the most!  I also wonder:  if you had to recommend one tool to a relative newbie, which would it be?
Posted by Emily Richards at 2:33 PM